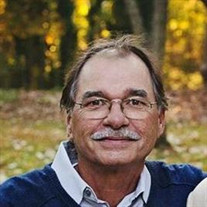 Bruce Edward Lamey, born October 26, 1951, passed away at his home on November 11, 2015 after a long battle with cancer. He was 64. He loved his five children: Eric Che (Brenda) Lamey, Shannon (James) McGee, Nicholas (Mandy) Lamey, Aaron (Christine) Lamey, and Jestein (Jonathan) Gibson and twelve grandchildren: Magdalena and Nelson Lamey, Chesney and Jacob Borden, Jace and Braden McGee, Ella, Grace, and Adam Lamey, Abigail and Eleanor Gibson, and Luke Lamey. He leaves behind nine brothers and sisters: Nita (Ralph) Hill, Tom (Gayle) Lamey, Harley (Jodi) Lamey, Clarence, Jr. (Barbara) Lamey, Richard Lamey, Patricia Lamey, William (Virginia) Lamey, Robert Lamey, and Noma Lamey; sister-in-law Janice Lamey; and many nieces and nephews. He is preceded in death by his wife, Mary Isabelle McCraw Lamey, his father, Clarence R.B. Lamey, Sr., his mother, Margaret Leona Lamey Brewer, his older brothers, Barcy Wright Lamey and Ronald Bradford Lamey, and step-father, Harold "Tootsie" Brewer. He was recently retired, and enjoyed spending most of his time with his friends and family at the Memphis Tiger games, in his Cordova neighborhood, and at the Glen Eagle Golf Course. In lieu of flowers, we ask you to make a gift of support to the University of Memphis Athletics Department to support Tiger Student-Athletes or the American Cancer Society. Mr. Lamey's service information will be posted as soon as the information becomes available.

The family of Bruce Edward Lamey created this Life Tributes page to make it easy to share your memories.

Send flowers to the Lamey family.