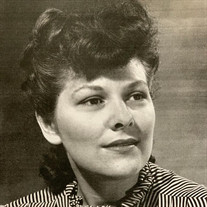 Esther L. Graesser died on November 2, 2021 at the age of 103! The ultimate extrovert, Esther was a fun loving, curious, optimistic, big hearted people person, who experienced her slice of life to the fullest. She was a woman of determination, intense emotions, warmth, and strongly protective of the convictions she believed in and the people she loved. Esther loved variety and was an appreciator of such things as the theater, Kahlil Gibran, fresh artichoke hearts dipped in warm butter, of ancient and new age wisdom. Born Esther Lydia Klopfer on October 7, 1918 in Buffalo, New York to parents Fred and Lydia Klopfer, she was the youngest child with one sister, Hilda, and three brothers, Harold, George, and Clarence, all now deceased. As a young woman she became a live-in Nanny to the two young sons of the wealthy Victor Lownes family. When they relocated to Miami, Florida where Mr. Lownes moved up in the movie industry, she went with them to care for the two sons. Esther spoke with enthusiasm of her many fond memories of those exciting days of glamour and meeting famous movie stars. In 1940 she fell in love with and married Roy K. Graesser of Orchard Park, New York where they owned and operated together a mom-and-pop grocery store. After Roy returned from the war, they bought the Orchard Park Press, a weekly newspaper. Roy was its editor while continuing as teller at the local bank. While hard working, they were loving parents and devoted providers to their children. In 1955 the family moved to St. Petersburg, Florida. While her husband worked for the Gulf Beach Bank, Esther educated herself in the virtues of health foods, intent on keeping her family healthy. Her children vividly remember waiting in the car during her every Saturday trips to the Goodwill and Salvation Army to “save money.” Esther was always up for a new venture. She operated a second-hand clothing store, a flea market booth, and developed an “antique” store on Sunset Beach area of Treasure Island in St. Petersburg. She was devastated when it was totally demolished in the severe gulf hurricane around 1968. Roy and Esther owned the Driftwood Inn, a waterfront restaurant and bar on the coast, famous for Esther’s unique wine coolers. Roy was Vice President of the bank when he retired, prior to his death in 1993. Their home was a welcoming place to family and friends, and they looked forward with pride and love to holiday family gatherings. Esther is survived by her four children: Susan Graesser and partner Bonnie Engelhardt (Orleans MA), Tarie McPhearson and husband Gary (Branford Florida), Arthur and Nancy Graesser (Memphis TN), Karen Morris and husband Paul (High Springs Florida), three grandchildren, nine great grandchildren and 11 great great grandchildren. ﻿For the last years of her life, Esther was living in assisted living facilities in Memphis and in Methodist Hospice Residence during the last 10 months. A deep thanks go to the caring staff of her residences, to Kathryn Feinstone and Marian Weber of Attendant Care Services, to Pat Hickman and Laura Alexander of ITN Memphis, and special friend Ellen Vizzi. There will be no service but there are future plans for a celebration of life gathering at Forest Lawn Cemetery in Buffalo, NY. The family asks that in lieu of flowers, consider a donation to the Methodist Hospice Residence (6416 Quince Road, Memphis, TN, 38119, 901-818-2102, [email protected]) who lovingly cared for her in her final months of transition into her next adventure!

Esther L. Graesser died on November 2, 2021 at the age of 103! The ultimate extrovert, Esther was a fun loving, curious, optimistic, big hearted people person, who experienced her slice of life to the fullest. She was a woman of determination,... View Obituary & Service Information

The family of Esther Graesser created this Life Tributes page to make it easy to share your memories.

Send flowers to the Graesser family.