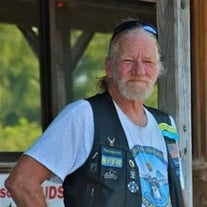 Forrest Michael Woodruff (Tenspeed), 67, of Millington, TN left this world on August 14, 2021. Mike was born March 5th, 1954 in Rolla, MO to the late Forrest Roy Woodruff and Leota Southards Woodruff. He joined the United States Navy in 1971 to travel the world, and after the military, he began driving a truck until he became disabled in 1993. Mike was very passionate about helping veterans, and attended many charity functions to raise funds or serve those at the VA Hospital in Memphis, as well as many other local charities. He was a proud member of the law enforcement Motorcycle Club, Reguladores, where he served as their secretary in The Blues City Posse Chapter in Memphis, TN. He is preceded in death by his parents, Forrest Roy and Leota, his sister Deborah Woodruff Herrera, his niece, Cassandra Alexander, and nephews, Bryan Baker and Charles Alexander. He is survived by his wife of 41 years (married 32), Paula W. Woodruff, children Shane Earl Woodruff (Erica), Marcia Woodruff Stowe (Brian), Forrest Michael Woodruff II (Tracey), and a bonus son, Johnathan Odell. Eight grandchildren, Alex, Destiny, Cory, TJ, Nathan, Jorden, Kayla, Savannah, and one great grandchild, Gabriel. Siblings, Sandra Howe (Del), JD Woodruff (Doris), Stormy Martin (Harold), Ernie Woodruff, Carla Huddleston (Kevin), Kim Murphree, and many nieces and nephews. There will be a Memorial service held for Mike on September 10th, 2021 at 2:00 PM at Memorial Park Funeral Home and Cemetery, 5668 Poplar Ave. Memphis, TN 38119, in the Rotunda. He will be cremated and will remain with his wife. In lieu of flowers, the family requests that donations be made to the Memphis Veterans Hospital to the program of your choice. https://www.memphis.va.gov/giving/index.asp

The family of Forrest Michael Woodruff created this Life Tributes page to make it easy to share your memories.

Send flowers to the Woodruff family.