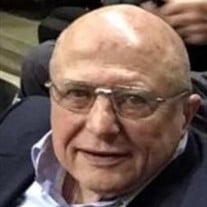 Gilbert Russell (Gibby) McSpadden, Jr., 87, died peacefully Tuesday, May 24, 2022, at his Memphis home. Gibby was a great family man and loving father. He is survived by his daughter Amy McSpadden of Memphis, with whom he lived, his grandson Stone Ridens McSpadden also of Memphis, as well as numerous cousins, his estranged wife Janice Mae McSpadden of Ridgeland, MS, and her children and grandchildren. Gibby was predeceased by his loving first wife, Jane Ridens McSpadden and his son Gilbert Russell (Rusty) McSpadden, III. The family is grateful for the loving care of LaShunda Haymon of Ridgeland, MS and Shuntae Harris of Memphis. Gibby was born on November 19, 1934, to his parents Delia Tate and Gilbert Russell McSpadden, Sr. of Memphis. Always giving back, Gibby was a very social and active man within his community. Gibby was a member of the Phoenix Club, the Boys and Girls Club, the University Club of Memphis, which he represented as the Carnival Memphis Prince, Grace St. Luke's Episcopal Church where he served on the Vestry and was elected Junior Warden, and as a member of the Board of Trustees of Grace-St. Luke's Episcopal School. Gibby was a lifelong Episcopalian and was proud to have attended the first service of the merger of Grace and St. Luke's churches on Thanksgiving Day 1940. Gibby was an Eagle Scout with the Boy Scouts of America, Troop 34, and passed his tradition of scouting down to his grandson, Stone. Gibby was also the volunteer wrestling coach with the Mississippi Schools for the Deaf & Blind and a member of Toastmasters International in Jackson, Mississippi. Gibby was a graduate of the Baylor School in Chattanooga and a graduate of Washington and Lee University in Virginia. At Washington and Lee, Gibby finished his collegiate wrestling career with a 40-3 overall record, received the 1955-56 Washington and Lee Outstanding Athlete Award, won 2 Southern Conference Championships and in 2009 was inducted into the Washington and Lee Sports Hall of Fame for Wrestling and Track and Field. Graveside services will be on Saturday, June 18 at 10:00 AM at Memorial Park. If you are unable to attend in person we will be hosting his service via Zoom Meeting. You will need the Meeting ID: 308 791 2707 and Passcode: 0SyixV to attend. https://us04web.zoom.us/j/3087912707?pwd=dzB1bDVoYU9CYWZHQ1dNekxDWlJjQT09

Gilbert Russell (Gibby) McSpadden, Jr., 87, died peacefully Tuesday, May 24, 2022, at his Memphis home. Gibby was a great family man and loving father. He is survived by his daughter Amy McSpadden of Memphis, with whom he lived, his grandson... View Obituary & Service Information

The family of Gilbert Russell McSpadden created this Life Tributes page to make it easy to share your memories.

Send flowers to the McSpadden family.