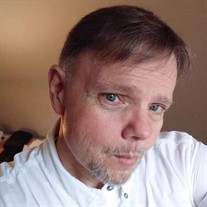 Gregory Vance Hughey, 61, passed away peacefully on Tuesday, August 27th, 2019. He was born on September 14th, 1957, in Memphis, TN. He was a 1980 graduate of Christian Brothers College, where he majored in History and founded the Society of Cicero for Pre-Law students. Following graduation, he enlisted in the U.S. Air Force, where he began as a life support systems technician and was named Outstanding Airman of the Quarter for the 310th Tactical Fighter Training Squadron at Luke AFB, AZ. He then cross-trained to communications in Special Operations, which took him all over the world. After twelve years of service, he was honorably discharged in 1992 and transitioned into a civilian career in telecommunications. His interests included science fiction, meteorology, astronomy, nature, reading, photography, music, and three-dimensional chess. Greg’s family and friends considered him to be a fun-loving, intelligent visionary with a witty, sarcastic personality. Greg was a Christian by faith. He was preceded in death by his father, Van Craig Hughey. He is survived by two sons, Elisha Lee Hughey of Mobile, AL, and Anthony Le’Dreamus Hughey of Memphis. He also leaves his mother, Wilma Jean Garza (Conrad) of Garland, TX; sisters Cynthia R. Lawrence of Memphis and Kimberly D. Boyd (Jerry) of N. Richland Hills, TX; brother Robert W. Hughey (Rosanna) of Dallas, TX; and half-brother Michael Craig Hughey (Janice) of Smithville, MS; nieces Kelsey R. Lawrence of Memphis, Laura E.Hughey of Dallas, TX, and Eve E. Hughey of Dallas, TX; nephews Matthew C. Boyd of Ft. Worth, TX, and Joseph A. Hughey of Dallas, TX; and other extended family. A memorial service and interment of ashes will be held at the rotunda of the West Tennessee State Veterans Cemetery at 2:00 p.m. on Friday, September 13th. In lieu of flowers, the family requests donations be made to charities supporting the U.S. Military or the donor’s choice.

Gregory Vance Hughey, 61, passed away peacefully on Tuesday, August 27th, 2019. He was born on September 14th, 1957, in Memphis, TN. He was a 1980 graduate of Christian Brothers College, where he majored in History and founded the Society of... View Obituary & Service Information

The family of Gregory Vance Hughey created this Life Tributes page to make it easy to share your memories.

Send flowers to the Hughey family.