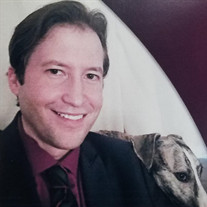 Obituary for James Pritchard James Huw Pritchard, fondly known as Jamie by his family, died in Memphis Tennessee on September 9th 2019 at the age of 43. James is survived by his father Huw and mother Alice Pritchard, his sister Bethan Sallé, brother-in-law Stephen, nephews James and Conway and nieces Chloe and Kolette. James is lovingly remembered by his numerous aunts, uncles, cousins, God parents, God brothers, friends and colleagues. James was born in Bridgnorth, Shropshire England on April 1, 1976. James completed his secondary education at Oldbury Wells School, Bridgnorth; then completed postsecondary education at Aston University, Birmingham; the University of Wales, Aberystwyth securing a BA in History and Film Studies. James enjoyed a very successful career path working for various advertising companies in Chicago, Nashville, Fort Lauderdale, Des Moines and finally, Memphis where he was the head of marketing for the Perkins Restaurant brand. Colleagues from this last position said, “We will miss his sense of humor and fondly remember his classy suits complete with cufflinks (even on casual Friday) and colorful socks. His unforgettable British wit made him a delight to be around.” James was well known for his dry sense of humor; he also adored animals; especially his ancient pet cat “Chicken” and his two whippet dogs, Raleigh and Photon. As a child, Jamie was involved in cub scouts, air scouts, went to Space Camp, was an alter server at church and even at a very young age had impressive computer skills. James obtained his Pilot’s license, enjoyed the thrill of parachute jumps and hot air ballooning. His travelling adventures took him took him to Iceland, Hong Kong, Philippines, Europe, Mexico and Alaska. We thank our family, friends, and James’ colleagues for the enormous amount of support you have surrounded us with following our precious Jamie’s death.

Obituary for James Pritchard James Huw Pritchard, fondly known as Jamie by his family, died in Memphis Tennessee on September 9th 2019 at the age of 43. James is survived by his father Huw and mother Alice Pritchard, his sister Bethan Sallé,... View Obituary & Service Information

The family of James "Jamie" Huw Pritchard created this Life Tributes page to make it easy to share your memories.

Send flowers to the Pritchard family.