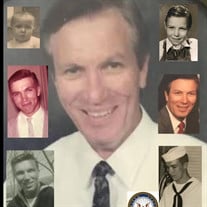 James (Jim) was born to Raymond Luther Seymore and Homer Irene Gray on April 3, 1939 in Chattanooga TN. He graduated from High School and joined the United States Naval Reserve at the age of 21. He served as an Electronics Technician stationed in Key West, Florida. Prior to being stationed in Key West, Jim married Ellen Loreen Huff. Jim and Ellen had 3 daughters while married. Later in life he married Irene Seymore, where he gained more grandchildren and great grandchildren. He leaves as his legacy 3 daughters: Susan Sanders (Beau) of Hernando MS, Sandra Ferguson (Kelly) of Pontotoc MS, and Sheila McGowen (John) of Nashville TN. He also leaves to cherish his memory 3 siblings: JoAnn Seymore and Lana Jane Ellis Lowery – of Panama City Beach Florida. James Allen Ellis of McDonough Georgia. 5 Grandchildren – Nikki Nagel, Michael Nagel, Shannon Nagel, Helena Nagel, and Karson Green - all of Memphis, TN. In addition numerous nieces, nephews, one great nephew, 9 grand-dogs and 2 grand-cats. He was preceded in death by his 2 wives, Ellen Huff and Irene Seymore, his brothers John Raymond Seymore and Jack Edward Seymore, and a very special friend in his later years, Sharon Strauss. Upon honorable discharge from the U.S. Navy - Jim joined the workforce and became a Memphis TN cab driver for Yellow Cab. The time of “real cab drivers” – Jim could take you anywhere in Memphis in a minute’s request. Jim then became employed with regional specialty delivery companies to transport/deliver time sensitive/volatile items – in time of need. Jim took great pride in his work throughout his entire life. Jim was known by his family and friends as a very kind, gentle, soft spoken compassionate soul. He had the sweetest smile that made you feel so very special. He was an avid golfer and frequented Memphis’ Galloway Golf course (1 of many) and continued to follow the sport in his senior years via cable television. Jim's family knew him to enjoy an occasional trip to Southland Park to watch the greyhounds.He loved animals and was a fantastic bowler. His family will miss him dearly. A Memorial service will be held in Panama City Beach, Florida in early August. The family would like to thank Memphis Baptist East Memorial hospital (ICU and Hospice Unit) for their loving care and compassion during their father’s illness and passing.

James (Jim) was born to Raymond Luther Seymore and Homer Irene Gray on April 3, 1939 in Chattanooga TN. He graduated from High School and joined the United States Naval Reserve at the age of 21. He served as an Electronics Technician stationed... View Obituary & Service Information

The family of James "Jim" Seymore created this Life Tributes page to make it easy to share your memories.

Customized sympathy cards. Mailed for you.