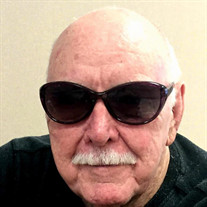 Jimmy L. Stanford passed from this earth and entered Heaven on Friday, April 17th, 2020. Born on August 29th, 1945 in Heath, Arkansas to Sarah and Jesse Stanford, Jimmy enjoyed growing up as kid number 8 with his 13 brothers and sisters. He entered the US Navy during the Vietnam War and served from Nov. 1, 1965 to Oct. 31st, 1969 with the HC2 Helicopter squadron on the USS Forrestal. He married Kathy before serving his second tour on the USS Intrepid. After serving, he and Kathy continued their life in Memphis by way of Chicago and McNairy County. He was a master barber/hairdresser for over 30 years and loved all of his wonderful customers and considered them his friends and family. A longtime Catholic, he enjoyed serving wherever he could (though his favorite was in the kitchen) at Resurrection Catholic Church in Memphis for over 40 years. He was always there for his 3 boys’ games, concerts, band, theatre, wrestling and other activities and continued that devotion to his 10 grandchildren. Enjoying the church golf league, bowling team and Knights of Columbus were highlights too. He was always up for a party and a good time and was beloved by anyone who met him. He was a favorite client of the Page Robbins Adult Day Care Center and the Oxford, MS Veteran's Home. Jimmy was always so proud of his brothers and sisters,nieces and nephews, cousins, and brother-in-laws and sister in-laws. While we can’t list them all,each of us close to him had friends, family members, teammates, in-laws, etc. that he took in as his own and loved as if he’d known them forever. What a special gift of a man he was to us all. But his true pride and joy was his wife of 52 years, Kathy, his sons Mark (Suzanne), Adam (Kelly),and Brian (Melanie) and his grandchildren in age order, Kaitlyn, Christopher, Aidan, Grayson, Sophia, Elijah, Draigan, Nathaniel, Raphael, and Owen. Though Alzheimer’s disease took some memories away from him, he was always still the sweetest man who had the best laugh ever. May he rest In peace. A celebration of life will be planned in the months to come. In lieu of flowers in the meantime, donations may be sent in his honor to Resurrection Catholic Church, 5475 Newberry Avenue, Memphis, TN, 38115 or to St. Jude Children’s Research Hospital https://www.stjude.org/donate

Jimmy L. Stanford passed from this earth and entered Heaven on Friday, April 17th, 2020. Born on August 29th, 1945 in Heath, Arkansas to Sarah and Jesse Stanford, Jimmy enjoyed growing up as kid number 8 with his 13 brothers and sisters. He... View Obituary & Service Information

The family of Jimmy L. Stanford created this Life Tributes page to make it easy to share your memories.

Jimmy L. Stanford passed from this earth and entered Heaven on...

Send flowers to the Stanford family.