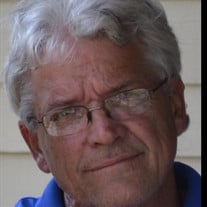 Larry Max Duncan,70, of Memphis and formerly of Puryear, passed away on Friday, August 16, at St. Francis Hospital in Memphis, Tennessee from complications associated with surgery. No funeral services were planned. He was born in Murray, Kentucky, on January 20, 1949, third son of the late Max and Sue Duncan of Puryear. He was also preceded in death by two brothers, Danny and Eddy. Larry is survived by his wife of 48 years, Sherry. They were married on December 18, 1971. Larry and Sherry have three sons, one grandson, and four granddaughters, all of Shelby County Tennessee. They are: Eric, Cody (Tricia) and their daughters, Taylor and Kalin, Brett (Stacey) and their son, Levi Max and their daughters, Ryann Faye and Ellery Donna. He is survived by his three sisters, Stella (Jim) Caddell of Puryear, Marsha (Phil) Routon of Paris,Tennessee and Lawana Ward of Bartlett,Tennessee, a sister-in-law, Joyce Duncan of Pulaski,Tennessee and his immediate nieces and nephews: Edward Underhill, Claire Ward, Stuart and Wesley Routon, Krista, Terry, and David Duncan, Tonya, Tosha, Shon, and Shayne Duncan. He leaves a host friends and cousins. Larry attended the Puryear School from first grade through graduation in 1967. He was a point guard for the 1965 District Championship basketball team with the Puryear Hornets. After high school, he graduated from the University of Memphis with honors, majoring in political science. He was a Constitutional scholar and was proud to have been a life-long Democrat. He was a sports aficionado and an avid fan for the University of Memphis Tigers basketball and for the Atlanta Braves baseball. Larry's family wants him to be remembered for being a wonderful husband, Dad, Pa-pa, and brother. A memorial is being planned to celebrate his life. Expressions of sympathy may be sent in Larry's memory to St. Jude's Children's Hospital, 262 Danny Thomas Place, Memphis,38105.

Larry Max Duncan,70, of Memphis and formerly of Puryear, passed away on Friday, August 16, at St. Francis Hospital in Memphis, Tennessee from complications associated with surgery. No funeral services were planned. He was born in Murray, Kentucky,... View Obituary & Service Information

The family of Larry M. Duncan created this Life Tributes page to make it easy to share your memories.

Larry Max Duncan,70, of Memphis and formerly of Puryear, passed...

Send flowers to the Duncan family.