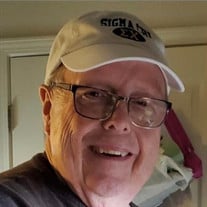 Larry Gerald Ryan passed away peacefully in the presence of his wife of thirty years on November 5, 2021, in Memphis, Tennessee at the age of 73 after complications from surgery. A Desoto County resident for many years, Larry was born Friday, February the 13th, 1948, in Baldwin, MS, the son of Gerald and Elizabeth Ryan. Larry and his younger brothers loved to laugh and reminisce about their fondest memories of childhood days spent having a blast and sometimes up to no good. After graduating Tupelo High School in 1966, Larry earned his bachelor’s degree from the SE Missouri State (SEMO) in finance in 1970, where he was a proud member of the Sigma Chi Fraternity. Larry had many close friends from Sigma Chi all throughout his life. Larry had a love of cars and the car business, which ran in the family. He began working in the car business at the ripe age of ten washing cars and ascended all the way to finance, and otherwise became known as the “F&I GUY”. He officially retired at the age of 69 but missed it dearly and made many close friends along the way. He also had a love of flying and was a small plane pilot for many years. At one point he even flew for the Civil Air Patrol in Desoto County MS. One thing is for sure, Larry never met a stranger and was a friend to everyone he met. Larry leaves behind the love of his life, Becky (Sisco) Ryan, two brothers, Jerry Ryan (Belinda) and Michael Ryan (Jan); five children, Jody Ryan Wilson, Geoffrey Ryan (Laura), Ricky Sisco (Reese), Mike Sisco (Darla), and Cindy Sisco; many grandchildren, great grandchildren, nieces, nephews, cousins; two loving dogs (Gus & Libby) and countless friends. Larry was preceded in death by his parents Gerald & Elizabeth Ryan, his grandparents and three nephews, Craig Ryan, Michael Ryan, Jr., and James Thompson. There will be a Celebration of Life planned in the near future. Expressions of sympathy and fond memories may be shared at www.smartcremationmemphis.com. In memory of donations can be made to any of the following nonprofits: 1. City of Hernando Animal Shelter c/o Hernando City Clerk 475 W. Commerce Street Hernando, Mississippi 38632 Made payable to City of Hernando in memory of Larry G. Ryan 2. Huntsman Cancer Foundation for Women In Honor of Larry G. Ryan 500 Huntsman Way Salt Lake City, UT 84108-1235 3. Vietnam Veterans of America In Honor of Larry G. Ryan 8719 Colesville Road, Suite 100 Silver Springs, MD 20910

Larry Gerald Ryan passed away peacefully in the presence of his wife of thirty years on November 5, 2021, in Memphis, Tennessee at the age of 73 after complications from surgery. A Desoto County resident for many years, Larry was born Friday,... View Obituary & Service Information

The family of Larry Gerald Ryan created this Life Tributes page to make it easy to share your memories.

Larry Gerald Ryan passed away peacefully in the presence of his...

Send flowers to the Ryan family.