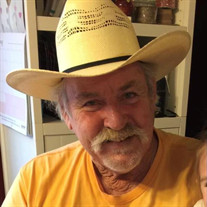 Larry Earl Spaulding Sr. was born July 1, 1948 to Earl Roe Spaulding and Dorothy Lerene Abbey (Geiger). He passed away February 13, 2021, in Southaven, MS. Larry was born and raised in Bloomington, IL. In 2012, Larry relocated to Coldwater, MS where he made his final home. Larry was preceded in death by both of his parents, his brother Terry “Bubba” Spaulding, step brother Wayne Cantrell and his grandparents. He is survived by son, Larry Spaulding Jr.(Victoria) Cape Coral, FL; daughter, Sherry Love Guthrie (Wayne) Dallas, Tx; son, Tracy Mattingly, (Carla) Lincoln, IL; daughter, Laci Martin (Jerry), Southaven, MS; grandchildren, Porche, Harley, Emily, Katy, Abbey, Andrew, Adli, Ainsley and Anniston and many great grand children. One sister, Karen Joy Chavira, Logan, UT; two half sisters, Kate Winfield (Frank) Portland, OR; Kim Geiger, Phoenix, AZ; One step brother, Ellis Cantell, Bloomington, IL and step sister, Eileen Cantrell Wilson, Tulahoma, TN. Mr. Larry was a member of U.S Army in the early 1970’s. This is likely where he gained his love for guns. Larry retired from Acme roofing in Bloomington, IL. He was an avid Harley rider and enjoyed the outdoors. In the last decade or so his favorite past times included reading western books, The Holy Bible and caring for his dog. Larry’s greatest joy in life was being a grandpa! He had an extremely close bond with his 8 year old grandaughter, Ainsley. Larry was vocal about having made peace with God and was ready to see his mother beyond the pearly gates of heaven. Larry will be so deeply missed by those who loved him. HonerableMention: Lloyd Edwards, Mr. Larry’s best friend in Mississippi. Pete Wheeler, Larry’s life long best friend, who he wished to reconnect with but never got the chance.

The family of Larry Earl Spaulding Sr. created this Life Tributes page to make it easy to share your memories.

Send flowers to the Spaulding family.