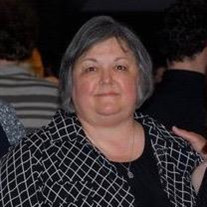 Melanie Pogue Semore 08/22/1954– 02/15/2021 On a snowy Monday in Memphis, February 15, 2021, Melanie Pogue Semore took her final breath at the age of 66 years. She is now joyfully reunited with her daddy, Douglas Pogue, and her mentor, Dr. Harold Bowie. Melanie is survived by her mama, Bettie Pogue; her brothers Kit (Cyndi), Andy (Lisa), and Robby (Sherry); her sister, Rebecca Galloway (Joe); several nieces and nephews, and a myriad of students, teachers, and friends. Melanie also leaves Michael, her beloved husband of 44 years, the life companion who tenderly and faithfully cared for Melanie at home during her final three months under hospice care. Melanie was born on August 22, 1954, in Columbia, Tennessee. She attended Freed Hardeman College where she and a handsome Michael Semore traveled with the A cappella Singers. Melanie Pogue married Michael Semore in 1976. In 1978 Melanie began a 40-year academic career as teacher, academic dean, and upper school principal of Harding Academy of Memphis. She earned an M.S. in School Administration and Supervision from the University of Memphis. Melanie served many years as board secretary for The National Christian School Association and was given their Vaughn D. Luster, Jr. Administrator of the Year Award in 2014. Melanie published two family cookbooks and Prayers of a Principal. Melanie Semore lived for others. English and history teacher, yearbook advisor, principal, note-writer, speech-giver, confidante, she was a country girl at heart who enjoyed sharing childhood memories of cows and creeks; she was her daddy’s little girl. From diagnosis in 2013 until death in 2021, Melanie’s mission on earth was to bring glory and honor to her Father God through her journey with cancer; mission accomplished. She was her Father’s beautiful daughter. Every day in her tenure as principal of Harding Academy, Mrs. Semore wrote a daily memo and a prayer. Her last memo each year before summer break always concluded with this reminder from The Last Battle, Book 7 of the Chronicles of Narnia by C. S. Lewis: “And for us this is the end of all the stories, and we can most truly say that they all lived happily ever after. But for them it was only the beginning of the real story. All their life in this world and all their adventures in Narnia had only been the cover and the title page. Now at last they were beginning Chapter One of the Great Story which no one on earth has read, which goes on forever, in which every chapter is better than the one before.” Melanie Pogue Semore is now beginning Chapter One. A celebration of Melanie’s life will be held at 1:00 on February 27 at the White Station Church of Christ. Due to COVID restrictions, attendance at the service will be limited by invitation; a live stream will be broadcast through the church website. (cocws.org) In lieu of flowers, memorials can be made to: Agape Child and Family Services, (https://agapemeanslove.org/) White Station church of Christ (http://cocws.org) The Pearl House, (https://thepearlhouse.org/) Melanie Semore Endowment for Excellence in Teaching (https://www.hardingacademymemphis.org/endowment-for-excellence-in-teaching).

The family of Melanie Pogue Semore created this Life Tributes page to make it easy to share your memories.

On a snowy Monday...

Send flowers to the Semore family.