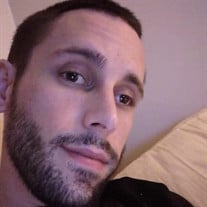 Nicholas Ray O’Kelly, “Nick”, age 33, who resided in Horn Lake, Mississippi, passed away in Memphis, TN on May 14, 2022 as the result of a fentanyl overdose. Nick was born in Memphis, TN on December 15, 1988, the son of Kathy (Mills) Gillespie & Robert Michael “Mike” O’Kelly. Nick attended Horn Lake High School in Horn Lake, MS. Most recently, he was employed as a carpenter for Allegheny Millwork. Nick enjoyed cars, rap music, reading, movies, & Memphis Tigers basketball, just like his dad. Along Nick's journey through life, he made many poor decisions, including experimenting with opioids as a very young adult. This eventually led him to the world of heroin. Once heroin got a hold of Nick, it never let him go. He was in and out of trouble with the law for years, as his addiction was treated as a crime. He fought for many years on his own and had experienced near fatal overdoses several times. Nick's family truly loved him and tried to be as supportive as possible as he struggled. Nick wanted a normal life, free from the chains of addiction, but sadly, he never received therapy or treatment for his disease. Despite his own struggles, he cared deeply for others and would help anyone in need if he could. He was a deeply sensitive soul, with a loving heart, warm spirit, and charming personality. Everyone he encountered in life knew this. He will always be remembered for the beautiful soul that he was. Even though his story came to a very sad end much too soon, if even one life can be saved because his was lost, his goal of helping others will carry on. He is survived by his mother, Kathy Mills Gillespie and her husband Kenneth Gillespie of Horn Lake, MS; sister- Melanie Lindsay and her husband Paul Lindsay of Memphis, TN; brother – Joseph Woodward and his wife Jennifer Woodward of Las Vegas, NV; stepsister Christy Woodward and her husband Robert Woodward of Horn Lake, MS; stepmother Rosetta O’Kelly; and several uncles, aunts, cousins, nephews, and nieces. Nick was preceded in death by his father, Robert Michael “Mike” O’Kelly. There will be a small service for immediate family members only. The family asks that in lieu of flowers, donations be sent to fentanyl & drug addiction awareness campaigns in Nick’s honor and that if you have a loved one who is fighting addiction, you do everything possible to be supportive and guide them to rehabilitation before it is too late.

Send flowers to the O'Kelly family.