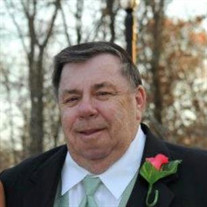 Ronald M. Jendras, 76, of Southaven, MS, passed away March 31, 2019. He was born September 10, 1942 in Chicago, IL - home of his beloved Chicago Cubs. He was united in marriage to Letitia L. Baron on January 11, 1964. He began working for the Illinois Central Gulf Railroad at age 18 and worked there for 27 years. His job moved him from Chicago to McComb, MS and then to Southaven, MS. His favorite things to do included fishing, painting and watching the Chicago Cubs. His favorite fishing partners were Joe Baroni and Mark Bass, his son-in-law. His health prevented him from fishing with his son, Jay and his daughter-in-law, Fran. Survivors include his faithful wife, Letitia; two awesome children, son, Jay (Fran) and daughter, Cheryl (Mark), his two favorite granddaughters, Magen Houston (Eric) and Mallory Benson (Patrick). He also leaves behind his siblings: sister, Phyllis Stubenfoll (Carl), brothers, Bill (Sue) and Michael (Sharon) all of Arkansas, his sisters-in-law, Cynthia Grieshop of Lake Forest, IL and Gerrie Strauch (Jay) of Mountain Home, AR. He enjoyed teasing with all his nieces and nephews: Jennifer, John, Peter (Kelli), Carol (Travis), Gary (Danette), Cindy, Guy, Kim, Bette and Brenda. He was preceded in death by his parents, Al and Wilma Jendras of Bull Shoals, AR, his in-laws, Leo and Jenny Baron and a brother-in-law he was close to, Louis Grieshop. He was blessed to have good friends and neighbors over the years, Sil and Joyce Cesario, Bill and Marcia Meals and Richard and Lucy Jackson. A visitation will be held at Christ the King Catholic Church from 11:00 a.m. to 12:00 and the Memorial Service will be held at 12:00 on Saturday, April 6, 2019 at Christ the King Catholic Church, 785 Church Road West, Southaven, MS with Father Greg Schill presiding. In lieu of flowers, the family requests donations be made to Tunica Humane Society, PO Box 236, Tunica, MS 38676, where his dog Nikki was adopted from or St. Jude Children's Research Hospital in Memphis, TN.

The family of Ronald M. Jendras created this Life Tributes page to make it easy to share your memories.

Send flowers to the Jendras family.