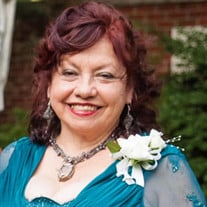 Rosalba Chaves Hernández de Jiménez was born in Villavicencio, Meta, Colombia on October 12, 1947 to Domingo Eduardo Chaves and Carmen Rosa Hernández de Chaves. At various times of her life she was a resident of Colombia, Venezuela and the US. Rosalba was a fervent Catholic and unexpectedly God called her by his side and into his Heavenly Kingdom and Celestial Court of Angels and Archangels as she always used to say, on Tuesday, October 13th, 2020 at her daughter's home in Memphis, TN where she had arrived the prior week. Rosalba had a strong catholic faith raising. She studied high school at Colegio de la Presentación-Nun's Boarding School in Facatativá, Colombia. She graduated with a Bachelor's degree in Bacteriology at Pontificia Universidad Javeriana (Jesuit University) in Bogotá, Colombia and studied Medical Technology at Temple University, in Philadelphia, PA where she married, and where Brenda Rose, her only daughter, was born. She worked as a health professional at several organizations such as the Venezuelan Institute of Social Security-IVSS, Caracas; San Pedro Claver Hospital in Bogotá and other hospitals and private medical institutions. Rosalba distinguished herself by her constant and multiple charity contributions - among others, supporting Father Moisés Rodríguez, Chaplain of Gerontológico de los Padres Jesuítas in Bogotá. Rosalba had a very giving soul, taking upon herself to selflessly care for relatives’ illnesses, without expecting to receive anything in return. God was kind, blessed us and privileged our family with that unforgettable "White Rose" (meaning of the name Rosalba). At all times she displayed the highest ethical and moral values and had a great giving heart. She was spiritual, charitable, and sweet with a joy and smile that was contagious. Rosalba loved 'música llanera’ - music and joropo (one of Venezuelan and Colombian folk melodies from the plains of these two beautiful countries). She was amazing with children and youngsters of all ages due to her youthful fun and always positive attitude. Her incomparable purity and inner beauty will last forever with us and through her descendants upon a legacy and example for younger generations to follow. Rosalba was preceded in death by her parents Carmen Rosa Hernández-Torres de Chaves and Domingo Eduardo Chaves-Galindo. She is survived by her husband of 22 years, Jairo Daniel Jiménez-Orjuela (MD), her only daughter Brenda Rose Mesailikh-Woolley, her son-In-law Michael A. Woolley, her adorable grandchildren, Carmen M. Woolley, William (Toño) A. Woolley and Benjamin M. Woolley, her siblings; Jorge Eduardo, Milton Eduardo, Eduardo, Noemi del Valle, Debra Aureliana, Jose Eduardo, Esmeralda Carolina; Margot (a Godsister raised by Carmen Rosa, Rosalba's mother) who grew up with Rosalba as close as sisters, and her brothers and sisters in-law, nephews, nieces, cousins and many friends who love her dearly. The family would like to express their appreciation to the SFA community, family and close friends, who have been very giving and kind towards the Woolleys (Rosalba's only daughter's family) and to her husband - Jairo D. Jimenez. Our heartfelt and special thanks and recognition to the Clergy and Staff of St. Peter Catholic Church and its Columbarium where Rosalba's ashes will rest. In lieu of flowers, we ask that contributions be made to either St. Francis of Assisi Catholic School in honor of Rosalba's grandkids and their upbringing Catholic education and/or to St. Peter Catholic Church. Contributions can be mailed to St. Francis of Assisi Catholic School to 2100 N. Germantown Parkway Cordova, TN 38016 and/or to St. Peter Catholic Church to 190 Adams Avenue at B.B King Street, Memphis, TN 38103. Please be sure to include Rosalba Chaves’ name in the memo section. On Monday, November 16th, 2020, a Holy Rosary in Rosalba Chaves honor will take place at 1:30 p.m. to be followed by her Funeral Mass at 2:00 pm both at St. Peter Catholic Church, 190 Adams Avenue at B.B King Street, Memphis, TN 38103. Upon conclusion of the Funeral Mass Rosalba’s catholic remains will immediately be interred at St. Peter Church Columbarium. (Out of respect for the Covid pandemic, everyone is asked to wear masks and keep social distance.

Rosalba Chaves Hernández de Jiménez was born in Villavicencio, Meta, Colombia on October 12, 1947 to Domingo Eduardo Chaves and Carmen Rosa Hernández de Chaves. At various times of her life she was a resident of Colombia, Venezuela and the US.... View Obituary & Service Information

The family of Rosalba Chaves Hernandez de Jimenez created this Life Tributes page to make it easy to share your memories.