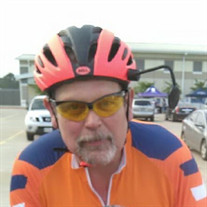 Mr. Scott L Marti Obituary 06/25/1958 to 06/26/2019 Mr. Scott L. Marti, of Covington, TN, passed away on Wednesday, June 26, 2019 at the age of 61. Scott was born to parents Milford and Willa on June 25, 1958 in Wauseon, OH. He grew up as one of five children and attended Huntsville High School. In 1982, he married his high school sweetheart, Stephanie McLaney of Huntsville, AL. Scott and Stephanie had 2 sons and Scott adopted Stephanie’s son from a previous marriage. Scott started out working in the axle and hub business for his parents and continued in this field for 40 plus years, working his way up into management but relocating as the industry gave him an opportunity to advance to many companies and many states throughout the USA. Always improving his skills and talent in his field of work but leaving friends and family behind in some locations, though never burning a bridge behind him and leaving the door open, if he ever returned to that company (as he instilled that value into the boys). He and his wife missed the 4 seasons and hilly country so they moved to west Tennessee. Scott took on a new line of work, a change into the medical field as a manufacturing engineer of medical implants. Scott was a Master Mason, Scottish Rite, Cahaba Shriner Joker Unit and was from Helion Lodge #1. He was a 4 years NJROTC student and made Company Commander in his junior year at Huntsville High School. He enjoyed many outdoor activities including camping, sailing, and many charity rides and everyday cycling in Texas. Scott is survived by his wife, Stephanie; their sons and their wives , Reginald Wayne of Mexico, Scott F. and Deborah Marti of Texas, Nicholas S. Marti and Jessica Hall of Texas, his sister and Brother-in-law; Jeannie and Doug Baker of CA , his brothers and sister-in-law; Milford F. Marti II and Sue of NC, Terrence and Kathleen Marti of AL, sister and brother-in-law; Tamara and Clarence Hornsby of AL, five granddaughters; and 1 great-granddaughter. He is preceded in death by his parents Milford F. Sr. and Willa K. Marti of AL; A wake and celebration of his life was held on June 27th at their home in Covington, TN. Many joyful stories were passed around between family, friends, and coworkers. The cremation took place by Smart Cremations in Memphis TN. The family is grateful for the condolences, in leu of flowers please donate to one of the following; the American Herat Association, Diabetics of America, Multiple Myeloma cancer research, or Infectious Diseases Research.

The family of Scott L. Marti created this Life Tributes page to make it easy to share your memories.

Send flowers to the Marti family.