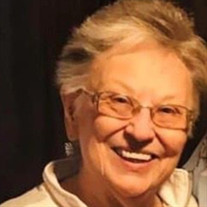 Sharon Taylor Boyer, age 75, of Memphis, Tennessee passed away peacefully in her family home on Monday, November 23rd, 2020. Sharon was born on August 31st, 1945 in Elmhurst, Illinois to Herman and Dorothy Taylor. Sharon’s family moved from York Center, Illinois to Memphis, Tennessee in 1953. When asked what she felt her greatest accomplishment in life was, she said, “that all three of my children know Jesus, and my grandchildren as well.” Her middle name was Joy, and we know that her “joy” was made complete on that Monday afternoon upon entering paradise to be with Jesus. Sharon graduated from Overton High School in 1963. She was remembered by her friends to have had an armful of books and a big smile on her face. Sharon went to the University of Memphis as an art major. She married twice and had three children. Her husband, Randall Lynn Boyer, preceded her in death on September 4th, 1999. If you knew Sharon, then you knew that she was a “mom” to many besides her own, that she was proud of her Memphis roots, and that she treasured Jesus. She was witty, resourceful, and tenacious! She gave of her time, her talents, and her treasures to love others well. “It is so wonderful being “Jesus with skin on” for someone else”, she would say. Sharon liked cooking for a crowd. She would jokingly say, “Never trust a skinny cook.” or “Even my mistakes are edible.” Sharon liked to garden. She always said, “You’re never closer to God than when you are in a garden.” She was eager to point you to Christ in everything. She loved to decorate for the holidays! She had an acronym or phrase for just about everything. She liked to cause others to smile/laugh - whether the laughter was at her, with her, or at themselves, it made no matter -because she just meant for you to part ways having enjoyed a bit of humor. Some of the token phrases she chose are still in circulation among her family and friends, and they continue to bring laughter and lighten our loads. She had a great sense of humor, and yes, a fiery temper too! She would tell her daughter, “I repent every night. He’s used to me and my righteous indignation.” Her daughter admires the ways in which her mother turned ‘trusting Jesus’ into a treasure. Sharon often quoted Romans 8:28 as an encouragement, “And we know that in ALL things God works for the good of those who love Him, to those who have been called according to his purpose.” With an emphasis on the words, “AND WE KNOW”, she would remind her loved ones that there’s never a need to doubt His faithfulness. Sharon enjoyed music! She enjoyed Memphis blues, gospel, folk, country, jazz, big band, soft rock, & bluegrass. She would tell you that the quality of her life was far more important to her than the quantity of her years here on this earth because her eternal home was in heaven. Sharon liked to give and she was intentional in her gift-giving. Often her children and grandchildren received birthday and Christmas gifts that were practical/for everyday use. Nifty contraptions that you would never think to buy for yourself that just made life a bit easier. She would often say, “Work smarter, not harder” or “I’m trying to make life simpler”. Sharon really enjoyed connecting with people. She called these connections “divine appointments”. Whether she had known you a lifetime or just met you at the grocery store, the gas pump, social media, or Neil’s Grille and Bar (where she enjoyed going on the occasional Wednesday night to hear “Elmo and the Shades”, one of her fav. local bands). Sharon devoted much of her time and energy into caring for others, including her father when his health began to fail. She opened her home to many who were in-need, providing a safe haven, meals, showers, and a mother’s influence. Sharon worked as an administrative assistant and dental lab assistant for Strickland Dental Laboratory for 19 years. Before this time she worked in commercial insurance as a claims adjuster for Boyle Insurance Agency, and then Clay and Land Insurance Co. Sharon was survived by her sister; Karen Christine Remus; by her three children; John Taylor Arndt, David Paul Boyer (and his wife Mary Rebecca Tofaro Boyer), and her daughter Elizabeth Christine Boyer Dyess; Sharon was also survived by five grandchildren, Randall Lynn Boyer II, Julia Katherine Dyess, Georgia Anne Dyess, William Andrew Boyer, and Philip Arthur Boyer. Sharon was preceded in death by her parents, Herman and Dorothy Taylor; her brother Malcolm Eugene Taylor, and her sister Priscilla May Brower. There are no funeral arrangements, however, her family plans to hold a memorial celebration in her honor in the summer of 2021 as Sharon’s wishes were to have a backyard BBQ with Memphis Blues & Gospel music playing.

The family of Sharon Taylor Boyer created this Life Tributes page to make it easy to share your memories.

Send flowers to the Boyer family.