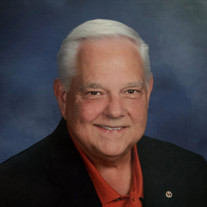 Thomas Warren “Tom” Doss 78, passed away on February 12, 2020 at home in Memphis, TN with his two daughters at his side. Born in Chattanooga, TN on December 12, 1941, he was the son of J. Fenton Doss and Catherine Mary Doss. Tom attended Christian Brothers High School graduating in 1959. He played saxophone in the band. He attended Christian Brothers College graduating in 1963 with a degree in Electrical Engineering. He continued to be involved in alumni activities for both schools over the years, most recently enjoying a 60th year band reunion this past fall. He graduated Southern Methodist University in 1968 with a master’s degree in Electrical Engineering. He worked at Texas Instruments in Austin, TX from 1964-1983, specializing in integrated circuit and super computer design. He worked in real estate investments and sales and marketing. He retired from Celestica Corporation in 2005 as a sales manager for defense and aerospace manufacturing services. Tom was a member of Saint Louis Catholic Church in Austin, TX where he was an acolyte serving on the altar for 15 years. He also served on the Financial Council for 14 years. He joined the Knights of Columbus Council 5967 and served 6 years as Council Trustee and served as Grand Knight in 1990-1991. He worked with the Boy Scouts of America in Austin, TX and was appointed Assistant District Commissioner for the Capital Area Council for many years. He moved to Nashville and became a member of Saint Stephen Catholic Church and transferred to Council 9282 in 2006 and served as Council Trustee for 10 years. He served 5 years as Board member and Treasurer of the Tennessee Hemophilia and Bleeding Disorders Foundation in Nashville. He also tutored elementary and middle school students as part of the “No Child Left Behind” program in Nashville schools. Tom had many hobbies. He loved to hunt and fish and was a member of the Texas Instruments Bass Club in Austin, which he caught the “BIG ONE”, a bass weighing 7 lbs. 2 oz., which he proudly mounted and displayed. The family enjoyed many fishing trips and camping trips together. The Smoky Mountains and The Rocky Mountains were his favorite destinations. He loved to travel and went all over the world for business and with his wife Joann. The most recent international trip was to the Holy Land where he renewed his wedding vows with Joann in Cana of Galilee on May 11, 2015. He enjoyed using his engineering expertise to build and repair all things household and automotive. He was a jokester and usually the life of the party. He and Joann were very social and had many friends. He loved his family and always wanted to spend quality time as often as possible. Tom is survived by his wife of 39 years Joann Benassi Doss, his two daughters: Elizabeth Doss, Catherine Petrie, and her husband Joseph Petrie. Stepchildren: Donald Meyer, Sandra Armstrong, her husband Jim Armstrong, Christine Worlow, and her husband Larry Worlow. Grandchildren: James Doss, Alexander Petrie, Abigail Petrie. Step grandchildren: John Miller, Georgia Utech, David Capps, Shawn Worlow, Patrick Schrader, Joanna Vogel, Chelsea Worlow, Dustin Meyer, Timothy Meyer, Donnie Lee Meyer, Thomas Armstrong and one great grandchild Eliott Thomas Doss. Tom was predeceased by his parents, J. Fenton Doss and Catherine Mary Doss, his grandparents, James Franklin Doss and Minnie Vanderpool Doss, infant Doss, and Step daughter Carla Capps. The funeral service will be held at Saint Stephen Catholic Church on March 14, 2020 at 1:00pm in Nashville, TN. The address is 14544 Lebanon Road, Old Hickory, TN 37138. The visitation for family and friends will be held just prior to the funeral. Memorial donations in lieu of flowers may be made to the Hemophilia and Bleeding Disorders Foundation, 242 Heritage Park Dr. suite 105, Murfreesboro, TN 37129.

The family of Thomas Doss created this Life Tributes page to make it easy to share your memories.

Send flowers to the Doss family.