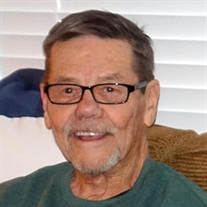 Tim John Hendrickson, 79, of Maquoketa, IA, passed away on August 22 at St. Francis hospital in Bartlett. He resided in Germantown, TN. Tim studied Mechanical Engineering at the University of Kentucky and went on to have a successful career. He was able to start a business with his father Tom (who he referred to as Dear Old Dad), and retired as the owner/CEO of Flo-Dynamics, Inc. After retirement, Tim enjoyed traveling the country to various motorcycle rallies cooking BBQ for the crowd. Tim was a proud father, grandfather, and friend. He loved adventure and acquired quite the collection of toys throughout his life - airplanes, motorcycles, boats, convertibles, and RVs. Some of his hobbies included traveling, photography, deep sea fishing, boating, riding BMW motorcycles, duck hunting, watching car races (he loved the Indy 500), flying airplanes, hanging out with friends, telling stories, watching college basketball (especially Memphis and Kentucky), and cooking. His favorite things to cook were barbecue, chili, and blueberry pancakes. He was known to enter cooking contests where he often walked away with the prize. Most recently, Tim enjoyed spending time on his boat at Pebble Isle Marina and coming to watch his grandsons play basketball. Tim was preceded in death by his parents, Tom and Clarice Hendrickson, and brother Donald “Donnie” Hendrickson. His life will always be remembered by those he leaves behind - his sons Tim Hendrickson and Tom Hendrickson, his daughter Terri Gallagher (Sean), and his grandchildren Alex, Drew, Mandy, Gage, Cooper, and Chance. He also leaves behind his dog (his best buddy) Bandit. Tim will be laid to rest with his parents and brother at Walnut Ridge Cemetery in Jeffersonville, IN. To honor his request, there will be no formal funeral. Please feel free to leave comments about your memories of Tim to keep his legacy alive. A small gathering and celebration of his life will be held later - date and city to be determined.

Tim John Hendrickson, 79, of Maquoketa, IA, passed away on August 22 at St. Francis hospital in Bartlett. He resided in Germantown, TN. Tim studied Mechanical Engineering at the University of Kentucky and went on to have a successful career.... View Obituary & Service Information

The family of Tim John Hendrickson created this Life Tributes page to make it easy to share your memories.

Tim John Hendrickson, 79, of Maquoketa, IA, passed away on August...

Send flowers to the Hendrickson family.