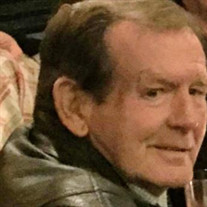 Holding the hand of his wife, to whom he was married for 55 years, Verlon Don Robinson passed away peacefully in his sleep on June 4th at the age of 78. Don finally succumbed to cancer, but only after beating it multiple times and bravely battling it all the way to the end. He is survived by his wife, Shirley (Hyde) Robinson, and their two children - Tracy (Wes) Fletcher and Steven Robinson. He is also survived by six grandchildren - Whitney (Jeff) Payne, Alex Roubidoux, Eric Roubidoux, Nic Roubidoux, Kyle Roubidoux, and Olivia Roubidoux, and by three great-grandchildren - Addie, Reagan, and Beckett. Don was born in Rector, Arkansas on January 9, 1942, the son of the late Paul Robinson and the late Ruby (Cupp) Robinson. He was preceded in death by brothers Sherrill, Danny, & Mickey Robinson and by a sister, Greta Caldwell . He is survived by brothers Alan & Barry Robinson, by sisters Pauletta Farmer, Sheila Whaley, Chris Smreker, and Vickey Willhelm, and by numerous nieces & nephews. Don served in the United States Army before spending much of his career as a machinist & Shop Foreman at Omega Tool Company in St. Louis. He & Shirley spent most of their marriage living in Festus, Missouri before relocating to Collierville, Tennessee after retirement. Don will be remembered by many for his hobby of rebuilding old cars & lawn mowers and for the pride he took in meticulously caring for his house & yard. Those who knew him well will also remember his sense of humor, his love of NASCAR racing, and his willingness to help his friends & neighbors. Those who knew him best will remember how hard he worked to provide for his family, how much he worried about them, how much he gave & how little he asked for in return. They will remember how eagerly he shared his laugh and how hard he fought to shield them from his pain. Mostly, they will remember how much love they received from him, occasionally in his words but more often in his actions. They will remember all of these things…and they will miss him dearly. The family would like to acknowledge the care Don received from the wonderful people at West Cancer Center in Germantown, TN. The family asks that you consider making a contribution in Don’s name to the West Cancer Foundation through the foundation’s website: www.westcancerfoundation.org.

Holding the hand of his wife, to whom he was married for 55 years, Verlon Don Robinson passed away peacefully in his sleep on June 4th at the age of 78. Don finally succumbed to cancer, but only after beating it multiple times and bravely... View Obituary & Service Information

The family of Verlon Don Robinson created this Life Tributes page to make it easy to share your memories.

Holding the hand of his wife, to whom he was married for 55 years,...

Send flowers to the Robinson family.