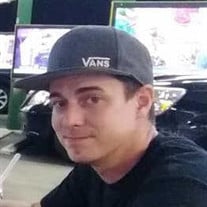 Zack David McGinnis, 31, Son of Kenneth James & Diane Marie (Dorff) McGinnis, passed away Sept 16, 2019, at his home in Memphis, Tennessee. He was born in Torrance, California on May 6, 1988, and has lived in many places throughout his life: Hawthorne, California, Duvall Washington, Surprise Arizona, Saratoga Springs Utah, Bellingham Washington and recently Bartlett Tennessee. He had just purchased his first home in Memphis. He enjoyed his Nephews and Niece, Legos, Snowboarding, Skateboarding, playing his guitar, and riding motorcycles (Harley). Most of His Employment was as a server and bartender. He also did some acting when he was 4 years old, appearing in a Mazda Commercial, a Bon Marche Commercial and an episode of Unsolved Mysteries. During the past 9 months, he was helping his parents with remodeling homes in Memphis Tennessee. Along with his parents, He left behind his Grandmother Shirley (Forrey) McGinnis, his brother, Kenneth McGinnis Jr (Emily Mariner McGinnis) their 3 children (Daisy, Alex & Lucas) from Surprise Arizona, brother Bryan McGinnis from Orem Utah, sister Janel McGinnis Case (Daniel) their 4 sons (Nathan, Tyler, Andrew, Christopher) from Wake Forest, North Carolina, brother Taylor McGinnis (Bailey Loveless McGinnis) their son (Oliver) from Saratoga Springs Utah, and sister Cherie Mayers (Mason) from Sandy Utah and many aunts, uncles and cousins. Preceded him in Death, one Nephew Eric Case & grandparents: Albert McGinnis and Reginald & Doralea (Davis) Dorff A celebration of life will be held October 5, 2019, in Pleasant Grove, Utah.

Zack David McGinnis, 31, Son of Kenneth James & Diane Marie (Dorff) McGinnis, passed away Sept 16, 2019, at his home in Memphis, Tennessee. He was born in Torrance, California on May 6, 1988, and has lived in many places throughout his life:... View Obituary & Service Information

The family of Zack David McGinnis created this Life Tributes page to make it easy to share your memories.

Send flowers to the McGinnis family.